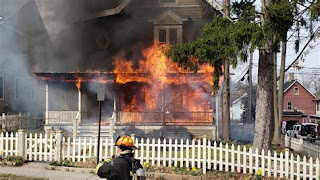 From the local rag’s 100 years ago today.

A fire at a house in the 800 block of 16th Street was extinguish with little damage. But Greeley Fire Chief C.P. Chetwood warned residents that when they call the fire department for a fire, they should give their address. Many callers leave the telephone before giving their address.

A short lived job while in college was swing shift at an airfreight forwarder. One night the heating unit on the roof started a fire. My boss got on the phone, called the Fire Department number (pre 911) and shouted,

“The fucker is on fire! Send a truck!”

Then he hung up. I called the fire department number and gave them our address before evacuating the building.

A brilliant plan was hatched. Rent a projector and screen and have a movie party on the loading dock. Invitations were sent out, refreshments brought in, and the party began. Unfortunately for the host, my boss, all the films turned out to be gay men doing their thing. The “party” fizzled.

As an old fart I can appreciate the many benefits of the digital age.

Posted by Well Seasoned Fool at 11:14 AM

Yep, actual addresses DO help, especially with the advent of VOIP phones...

If everyone stayed on the loading dock and watched the films, I expect that the fire was contained in short order.

Brandon Said : “Even Dr. King’s assassination did not have the worldwide impact that George Floyd’s death did.”
This guy really is Demented.

LL
The two events were separate - my writing skills are often lacking. the "Boss" did lose some status among his peers.

Amgela
It appears your comment was for someone else's blog.

OldNFO
You should know. Seem to remember you spent time as a fire volunteer.

and make sure they hae their house number visible on the front so first responders can see it when looking for the heart attack! really a problem in older rural villages and towns.