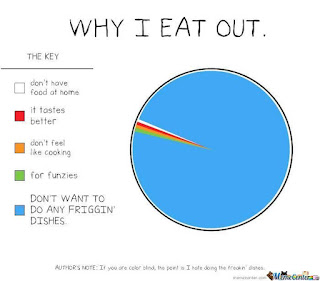 Memories of small out of the way family restaurants was sparked by a recent Lone Star Parson post.

At the end of 1969, as newly married, my wife and I enjoyed a family owned Thai restaurant in a sketchy part of Denver. It was located across from a city park, now a dog park, known then as “Needle Park”. Today the area is gentrification central.The motherly type who owned it seated you at a table and brought a rolling menu board. You selected a price level and that determined the number of courses you were served. The food was fantastic. She didn’t have a liquor license. We dined there at least once a month.

The 1980’s found us living in Renton, WA. A family operated the restaurant portion of a downtown bar. In the years ahead  they bought out the bar and now have a chain of restaurants.

Parking on 3rd Avenue was hit or miss so we always parked in the rear. Exiting, we usually went out through the bar. One night as we exited one of three drunk bar patrons reached out and grabbed my wife’s breasts asking,

I broke a chair over his head. His buddies decided to get into the fray. The chair was still somewhat intact so they got to experience the same fate as their buddy. Glass was broken, tables overturned, etc. As we left I put two $20 bills on the bar (a fair amount in 1980).

We didn’t go back for awhile but when we did we entered from the street. When our margaritas arrived, Mr. Rodriquez was the server. After putting the drinks down, he put some money on the table.

“The drinks are on the house. The change is from your last visit”.

Successful car salesmen develop contacts that refer customers. They are rewarded, in those days, $50 (out of my pocket), and the owner of a Chinese restaurant  referred many other Chinese buyers to me. I rarely made much of a commission on these transaction, usually a $50 minimum, but bonuses were based on volume and these sales helped my monthly numbers.

I often took my family to his restaurant. It was a price point menu, with various price points determining the number of courses. At one visit, he came over to take our order instead of his server.

“What will you have, he asked”.

“John, we like the $12 dinner for four but your price is too high! You want too much money”.

He gave me a “look” and went away. After the meal when the server brought me the check, he came over and picked up the check and put it in his pocket.  Wifey was surprised to see her cheap spouse leave a $20 tip.

Now I rarely eat out. Food has become fuel. When I do eat out, it is usually breakfast with family and friends. What is becoming a favorite is the local VFW breakfast buffet every third Sunday for $9 a head.  Yeah, I’m still cheap.

Posted by Well Seasoned Fool at 11:23 AM

"I broke a chair over his head."

LSP
Roots of my raising.

LOL, concur with LSP. And yes, 'cheap' local places, not chains, are STILL my favorites.

OldNFO
Wife had words outside as we got in the car suggesting I overreacted. Later she was bragging to her friends about how safe she felt with me around. Beyond Army basic, I've no martial arts training. What I was, and still am (a lot slower and weaker now), a dirty white boy.

Taking advantage of there drunks?
Shame on you.
Glad you weren't armed. That woulda been tempting.

And I forgot to say -- I hardly ever eat out any more, especially not at chains. There was a time, years ago in London when it was all pretty ritzy, and that was fun, for a time. Then, back in Texas, I enjoyed going out and spending way too much money on these things in Dallas.

These days? A homemade bean/brisket burrito's about as far as I go, maybe a breakfast, eggs, hash browns, toast -- or huevos rancheros. But that's about it. Much more doesn't sit well with me.

GB
While not drunk, we had a couple of adult beverages with our dinner. As to the drunks, bar fight while in the Army was good training. I have a CCW but only carry when transporting something of value. A short fuse and a hot temper are bad combinations.

LSP
London, 1965, I ordered coffee with fish and chips at a place in the train station. It came 1/2 milk. After drinking it, when I asked for a refill with no milk the lady as she turned away muttered, "Barbarian".

Ha! WSF... London in the '60s... well before my time but I remember the '70s. A different world. Things seemed to change and move into high gear (in London) in the mid 90s, everywhere you looked Bentley Turbos and big excess. Huh. I skipped and moved to Detroit(!), bizarrely.

LSP
I had a fun time in London. Stayed at A british Army hotel - spartan even by US Army barracks standards but cheap!