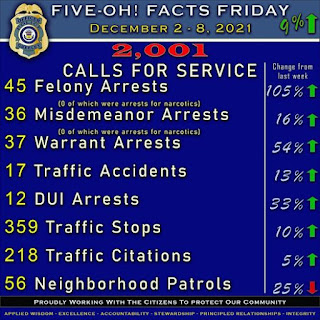 Living in a small city with a fairly low crime rate is a blessing. Serious crimes do occur but the “woke” mob hasn’t been able to diminish police funding. The courts are not lenient  with any crimes involving violence.

Crimes this week as reported by the local rag.

Both the county sheriff department and the city police department use Falsebook to get information out. “Warrant Wednesday” is a regular feature resulting in a nearly 100% capture rate.

Where I live is a blue dot in a sea of red, principally due to the 100 year+ old Teachers College, excuse me, Northern Colorado University.

Two gripes about the local police. First, they are damn good at catching me speeding! Second, they ignore all the “lifted” vehicles whose headlights haven’t been adjusted. Driving at night is like having many vehicles driving around with high beams on.

Like anyplace with people, crime occurs. So far, shoplifting isn’t tolerated. In many ways the area is still in earlier years; a good thing IMO.

Posted by Well Seasoned Fool at 10:29 AM

And I received a jury summons yesterday. I don't mind doing jury service, but it's in Loveland!

Lemons to lemonade. You will drive by one of my favorite grocery stores, Esh, on 71st West of Hwy 287.

Want me to pick anything up on my way home?

I'm with you, hate those oncoming lights. Should be banned.

DRJIM
I'll be visiting their Dacono store tomorrow. I'm being well paid to serve papers in the Peoples Republic of Boulder and will be passing through Dacono.

That seems to be quite a few 'calls' for just six days...

I still have to make it to Colorado Speedway in Dacano.I'd like to see some real Grass Roots racing again, like at the tracks back in Illinois.

DRJIM
Do it this coming season. House are being built all over that area and soon the noise complaint from "Karen and spouse" will escalate.

My son has been doing traffic control in the area, and he said it's being developed like crazy.

Farm fields are being filled with houses but the streets are still the two lane no shoulder farm roads. Traffic is a nightmare.