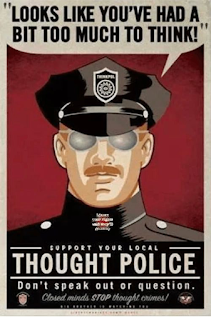 Along with “systemic racism” the lunatic left uses “policy violence” as a verbal club.

Wanting to understand just what the hell they mean, I came across this.

Two things stood out to me. First, the shouters aren’t themselves poor. They are making a fine living as “advocates”. Second, this is a fine excuse for not putting in the effort to raise yourself out of poverty. Equality of outcome with equality of effort.

Now we have that fine example of a patriot running her mouth.

She, and her fellow travelers, saying simply disagreeing with them is “policy violence”. Robust public discourse is violence? Apparently it is, according to these valiant defenders of “democracy.

Posted by Well Seasoned Fool at 9:02 AM

The media carry a lot of water for this scum.

As BZ has labeled them, "American Media Maggots".