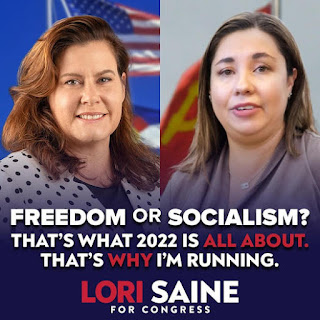 The recent Census has given Colorado an eighth congressional seat. Lori Saine has announced she is running.

If you search my blog postings for “Sister Kink” several posts come up. I worked with her in the car biz.

She is one of the hardest working people I’ve ever known, and her determination when she sets a goal is downright scary.

Years ago my bosses decided to open a used car lot in Windsor, CO. I found and leased a location, got the permits, etc. Who to run it? I picked Lori.

Across the street was a radio station and the owner, Dudley Brown was the founder of the Rocky Mountain Gun Owners Association. He and Lori became acquainted and he helped her first run for political office as a State Representative.

I won’t have a dog in this fight as I live in the Fourth district.

Posted by Well Seasoned Fool at 9:11 AM

I take it she's the one on the left with the American flag?

That is her. She is barely 5' tall but has always been attractive. A preachers daughter! There will be more candidates I'm sure - she just was the first GOP.

GB
Seems to be a pattern, doesn't it?

LSP
She's good at selling ideas. As a state legislator she was credited with several bi-partisan wins.

Back in the day Saturday mornings on the lot started with a walk around feature/benefit/advantage presentation competition know as a the six position sale. $50 to the person the manager judged to do it best. I was the only one Lori couldn't beat. She would be furious. It wasn't the money - she was driven to win.

Too bad you're not on the slate.

She has created a Facebook page for her campaign, "Lori Saine for Freedom". Already putting up inflammatory videos. She now has another Republican announcing for the seat and this one is formidable. 19 years as a county commissioner and now a State Senator.

I'm not up for running for public office. Too many years as a precinct committeeman burned me out.