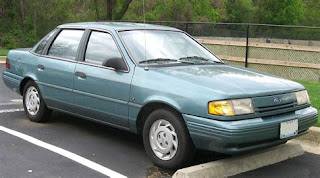 Sound  Ford, Renton, WA was my employer for several years during the 1990’s. I loved the Tempo, the best no brainer car Ford offered at the time.

The market was people who really didn’t like cars but needed one. They wanted simplicity, low cost, and reliability. The Tempo delivered value better than any car that comes to mind. Turn the key and it starts. Put it in gear and it goes down the road with no fuss or drama in reasonable comfort and ease of operation. A true no brainer ride.

We salespersons were compensated on gross profit, first, and volume second. Five to eight Tempos a month helped the volume goal, and on a Red Carpet Lease, the gross want over $1,000. Add a Thunderbird or hot Mustang along with a couple of Taurus and Escorts and you were in the bonus money.  Two or three high gross pickup sales (we never gave them away) and that wash out end of the month check was lovely. Good times.

For me new car sales lost appeal when two things happened. First, the manufacturers gave access to the dealer cost. Second, we were forced to disclose the capitalization cost of leases.

Around that time my marriage ended with me the custodial parent and I went to work at a used car lot. Less money but more time for my sons was worth it to me.

Those pedestrian Tempos will always have a warm spot in my memories. They put a lot of groceries down my son’s gullets.

It's odd that you'd post this because I'm just about to broker the sale of all these "vintage" cars -- an El Camino, '81 'vette and two 1940s Ford Roadsters, one hot rodded. Oh, and a an old panel van.

Hmmm. I think we're going to try and retail the beasts through "Classic Car Liquidators" out of Sherman. Let's see how that works. $$$$, please.

But yes, Ford Tempo -- cheap, works, doesn't get you in debt. As I understand it, people are paying 85k for a new pick up, without TTI. INSANE.

My wife had a Tempo and we liked it.
But the brake drums "threaded" on?
Drove me nuts trying to get them off.

LSP
Good luck! Marketing classic cars is way out of my league and expertise. Same with exotic.

EdB
Never did a brake job on a Tempo. The manufacturer suppliers can be fiendish for DIY. I need to remove a sensor on my 95 Buick to do a throttle body cleanup. Need a special GM tool for that. &*(()&!!! Probably will end up using vice grips.

Ah, Renton when it was still the but of jokes on Almost Live! every Saturday night.

Rented a Tempo for a long drive once. Liked it, and would have considered a new one if I hadn't just bought a Mercury Sable station wagon (which served us beautifully for 180,000 miles.)

R
Many of the jokes were appropriate. Tough town and a traffic nightmare at Boeing shift changes. At one time there were 15 new and used car dealers in a five mile radius.

GB
I always liked the Taurus/Sable lineup, especially with the 3.0 V-6. Their only real problem was a cheap part in some transmissions. Can't remember the exact transmission now but I always looked for it on the builder plate when doing a trade in appraisal.

Tempos were OK little cars. Not my type, but I had relatives who owned them, and they were a "car", nothing more, nothing less.

And that suits a great many people....

DRJIM
They were a "car" and all the advertising in the world didn't change that. Perhaps my most unusual Tempo customer was an all pro Seattle Seahawk. He was a low profile person. Later he bought a 3/4 ton Ford 4x4 Supercab, a white XL with crank windows. It did have a/c.

Good rental cars back in the day. I did like my Taurus SHO, mainly because I got one helluva deal on it.:-)

OldNFO
We didn't get many SHOs but they are one of my favorite cars.The car everyone overlooked was the 88 LTD II 5.0. At the time that fuddy duddy grandpa car was the fastest production 4 dr for sale in the USA. 150 mph capable.

I'm looking for the January 1970 issue of Playboy magazine. In it, comedian Mort Sahl wrote an article "Charmed By A Snake" about the 427 Shelby Cobra he had just purchased.
He commented that he could produce wheelspin in the car at virtually any speed just by mashing the loud pedal to the floor. I drooled the entire time while reading his article, and remember it well enough today to want to the magazine so I can read it anytime I like.
Talk to kids about "performance" today and they think you're referring to wattage of audio equipment.
Wattage... doesn't press your backside into the seat.
https://pipeandpjspictorials.wordpress.com/2021/08/04/charmed-by-a-snake-january-1970/

GB
Army, Germany, when I made SP 5 bought a 1958 Plymouth. Huge V-8. Ran that car at insane speeds on the autobahns on some very iffy tires. Memory fails me as to the engine size but it had two four barrel carbs. That was 1966 and I was probably the 10th owner. Sold it when I rotated.

Probably a 350?
Just seemed HUGE at the time:
https://www.classiccarcatalogue.com/PLYMOUTH_1958.html

GB
Probably correct but being a GI car most certainly wasn't stock. Had a "tasteful" 3 tone paint scheme, pink, black and white. Cruised the autoban nicely at 100 mph indicated.