Shall Not Be Infringed 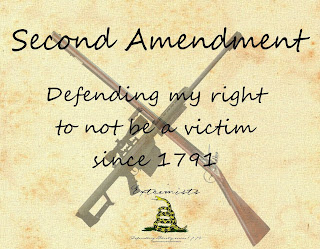 A YouTube post featuring a comedian mocking firearm owners got me thinking. Dangerous, right, me thinking? Fearful I’m in great danger in losing my choice cot in the re-education camp, on with pontification.

“We’re not trying to take your guns away”, was his lead line. Unspoken is the assumption we, my people, are morally and intellectually superior to you firearm owners. Out of kindness, we will indulge you, even though we should take your guns away. He then went on to create a dangerous imaginary character whose handling of a “gun” puts everyone in danger.

"A well regulated Militia, being necessary to the security of a free State, the right of the people to keep and bear Arms, shall not be infringed."

We do have a long history, as humans, of imposing consequences upon people whose actions harm others. I’ve no problem with that. Preventing actions, that may or may not occur, I do have a problem.

“But if it saves one life!!!!!!!!”, is the hue and cry. OK, then why don’t we require ignition interlocks on every vehicle so that every single operator must prove they haven’t been drinking before they can drive? Isn’t that the same logic?

We don’t live in a safe world and every time we give up a little freedom to feel safer, our world becomes less safe. Better we learn how to defend ourselves. A 90 lb woman with a Saturday Night Special is safer than with a “rape” whistle. Even safer, if she has had some self defense and firearms training.

Only commenting to be the first to agree.
Look at Australia.

This post is Captain Obvious to most readers but a few in the other camp wander by.

The presumption of guilt, or future guilt, is strong in these ones.

My first hands on introduction was the "Assault Weapons" ban in Kalifornia back in the early 90's. Weapons already in possession were grandfathered, but had to be registered. As you note, it is all based on the premise that something bad might happen. Sanctioning someone (fine/confiscation/jail) on that premise is a presumption of guilt.

Yes, I registered two weapons that I was likely to be seen in public with as a hedge. Today, there, those registrations have been rendered worthless. Here is Texas, I keep a copy posted in my man cave just as a reminder.

Ritchie
They are our "betters" and are only concerned with our wellbeing. Just ask them.

RHT447
Folks who are not delusional are leaving CA in large numbers. Unfortunately, enough delusional ones are in the mix.

They 'always' have an excuse for taking one more 'bite' of the rights cake... sigh

OldNFO
The problem is we let them. Going back to my youth, Resist Authority!

On last nights news, they had the story of a father who wanted to tell the “School Board” the story about his daughter who was raped in a school bathroom by a transgender Boy who was dressed in a skirt and who attacked, and raped his daughter in the Girl’s bathroom and HE was prevented from speaking to school board officials at a public meeting and then thrown to the floor, and thrown out of the room by at least 4-5 Police officers .These are the Domestic Terrorist that President Xiden has sent his storm troopers out to oppress!. Is this the sort of "Terrorist Parents” Biden wants to set the FBI on? The victim becomes the criminal in Biden's dysfunctional America. This is where we are in Joe Biden Land. It is TOTALLY Sad, to see that has become of this Country in such a short period of time. Because of the ILLEGITIMATE, MORONIC President that was INSTALLED by the Democrat Socialist Party.

P-C
Thanks for commenting. The rage in the country is building and the swamp dwellers seem obvious. Their response seems to be, "How dare you question us?"