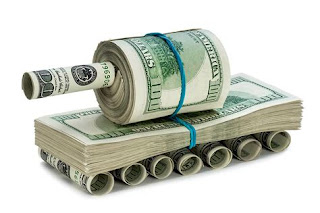 Military think. If it doesn’t cost a ton of money, the idea isn’t acceptable.

Circa 1965 the Army had a program that would pay a cash bonus to service members for ideas that were accepted. I made a submission.

At the time the M151 “jeep” replacement was new and people were getting killed in rollover accidents.

The cause was the rear suspension, more particularly the positive chamber of the tires. Go around a corner too fast and the inside rear tire, with no weight on it, would tuck under. Straighten out too fast and the tire would stay tucked under causing the vehicle to roll when weight was applied.

My suggestion was to install a strap to limit the distance the rear axle could drop. The tire’s amount of tuck would be reduced.

My idea was rejected. Several paragraphs were used but the point made was doing as I suggested would limit off road capability in combat.

My drawing showed two bolts on each side. How long does it take to remove four bolts? If time is critical, cut the  &*&^ straps with a bayonet.

Reading LL’s blog and posted remarks, I realize my error was submitting the idea through channels. Instead, I should have sent it to a defense contractor. After enough taxpayer money flowed, the brilliant solution would have been made service wide.

At the time, our Motor Sergeant liked the idea and unauthorized modifications to our M151s were made. Earned me a couple of beers.

I like this excellent post for its opening infographic, powerful. And I make the point to my eldest, "Do your time, get a commission, then go back in as a contractor and make twice as much doing the same thing. On a pension."

Speaking of pension, wish I had one :)

LSP
Sound advice you are giving your son. Given the way our country is going, I wouldn't count on a pension.

Or you could use a Camber Compensator like on a VW Bug, or my buddy's old Triumph Spitfire, which also had swing axles.

But the strap idea was also used on certain other cars, including some models of Roll-Royce, and Bentley.

And it would be easy-peasy to field modify the M-151's with one.

Didn't the Corvair have a similar problem?
Drafted in '66, I remember the problem with the "Mutt". We were cautioned about it.
You may have saved a few lives.

The first generation Corvair had swing axles, and yes, they could catch you off guard.

The second generation Corvair had a trailing-arm design similar to the Corvette, but with coil springs instead of a transverse leaf spring.

DRJIM/GB
Thanks for the comments/questions. I used them on my Fiat Abarth Zagato prior to going into the Army.

Google wasn't allowing me to comment. Let's see if this works. I was having the same problem at LSP's blog.

Anyway, if it doesn't cost DOD millions, they don't care. I recall needing to replace a windshield wiper. Supply brought a box with the motor, arm, and rubber wiper. Instructions require that you replace it ALL at a cost of likely $150.00. Yes, I was an officer who did my own work, WSF, don't judge me as if I was taking a job away from an enlisted man.

LL
I was often secretly amused at officers watching us work when you could tell they really wanted to jump in. Must be hard to stand by and watch all the time.

Ironically, I DID get a suggestion through the 'BeniSug' program back in the day, and did get a few bucks for it. I will admit it DID help that I had the backing of a senior Lockheed engineer though.

Oops hit enter too early. The 'oddity' of it was that I finally got the money as an Ensign...LOL Confused the hell out of people!

OldNFO
Did you keep the money? (Silly question)