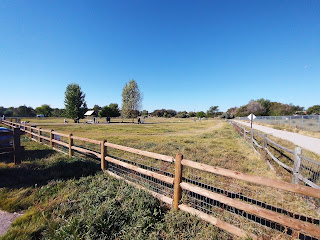 Our city has a four acre dog park Banner loves. He visited this morning along with at least a dozen other dogs. Smart dog! Starts getting excited the moment I turn onto the F Street road. 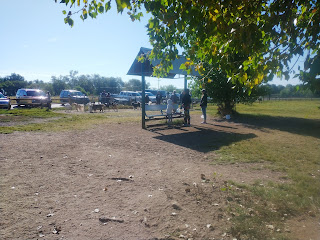 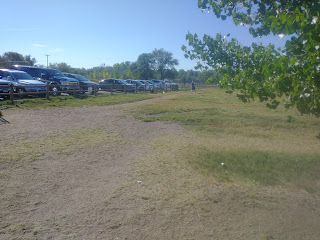 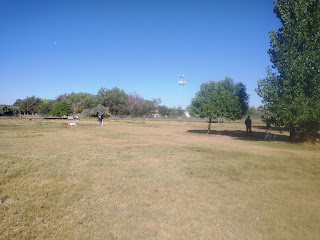 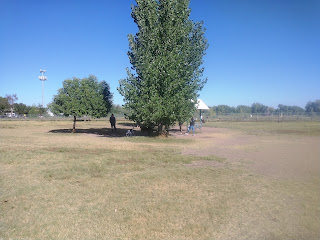 He will mingle with other dogs if they come up to him but would rather patrol the fence. One lap around is enough to wear him out.

Eating grass is something he loves to do. Since he gets chlorophyll liquid on his food every other day I don’t think it is a nourishment need. At his last home he had to fight two other dogs for food and may have eaten grass there because of hunger. The park is the only place I allow him to eat grass as I know the maintenance people never spray weed killer.

Occasionally, but not today, he will find something to roll in.While he mingles with other dogs, I mingle with some of the ladies.

My favorite beekeeper company was at the Farmers Market today and I was able to buy a one gallon jug of raw local flowers honey. That should last me for a few months. I put honey in my coffee. It helps with allergies, I believe. The theory is the bee’s pickup minute amounts of pollen that mixes into the honey. Taking a couple of spoonfuls of honey a day boosts your immune system. 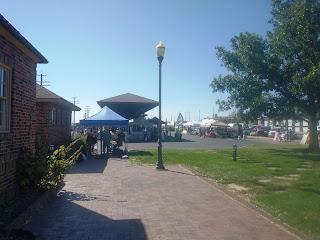 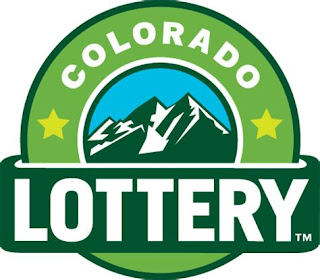 The profits from the Colorado Lottery are earmarked for recreation projects. Along the Cache la Poudre River, extensive hard surface trails are being built. Eventually the trail system will extend from Fort Collins to Greeley. The system sees a lot of use. Runners, bicyclists, walkers, and dog walkers are out most days excepting blizzards. After major storms the trails are plowed. The Greeley Police Department has a four person bicycle patrol unit for the trail system. 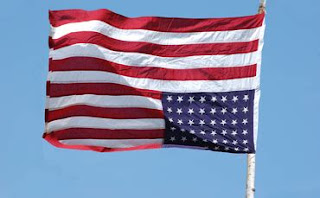 Other Bloggers do a better job than I can dissecting the foibles and malicious intent of our betters. That is why you haven’t seen much from me other than comments on other blogs.

I'm now clearing my throat so much others are beginning to notice.
I mentioned this to my caregiver... a PA, and he suggested honey in my coffee.
It hasn't stopped my problem, but it HAS helped. Maybe long-term it will fix it.
We'll see. I have an appointment with an ENT specialist next month.

I've been using raw honey for years, particularly to avoid Chinese or Indian filtered honey.
And for the pollen benefits.

Hi WSF, some honey sellers collect and sell pollen directly. Looks like Clarks does not though you could likely find it from one of your other suppliers.

We take Pebbles to the Spring Canyon Dog Park, or walk her along the Spring Creek Trail that runs through our little 1-mile square of FoCo. Being a "city dog" it took her a while to get used to seeing other wildlife. When we were up in Bellvue, she'd see cows, goats, llamas (I think. Could have been alpacas), and now she's seen geese, foxes, and other little critters.

And I've been adding local, raw, unfiltered honey to my coffee since we moved here. Seems to help, and I like the flavor.

GB
I've been doing the honey biz along with ten drops of food grade hydrogen peroxide now going on twelve years. Does it help? Don't know, but I'm sure it does no harm.

EdB
I make it a point to use local source.This company operates about 25 miles from me.

jeff d
I need to read more about pollen - something I'm currently ignorant.

DRJIM
Banner is very much a city dog. He gets nervous in open spaces.If there is a fence he will stay close along side it. Silly dog will not drink water from anything but a bowl.

I guess Pebbles adapted pretty quickly, then. She loves to go exploring and sniffing along the trails, and will drink water she finds. She won't drink stagnant or dirty water, but if it's clear or flowing, she'll lap it up. I find it nice that you can find dog bowls of water all over the place here. There's a lady who puts them out by her house, which is right along the Spring Creek Trail where it goes through here, about half a block away. Always clean with fresh water in them. She said it's good for the dogs to have a clean drink where they go in and out of the trail.

DRJIM
People put out water at the dog park and Banner takes advantage. He drinks about 1 1/2 quarts a day.

Two days ago I kept track and 17 different people petted him. He stoically accepts the attention.

I buy and eat local honey. That's one thing they have a lot of here. I thought of keeping bees, but decided to buy the honey instead.