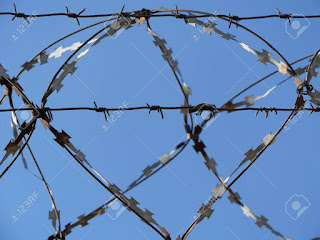 “So, when someone tightens the wire tell it breaks, it will wrap around my legs instead of yours?” smartass WSF replied.

“I knew you were experienced”, he replied with a grin.

Old family joke, a favorite of my mother, was the two most glamour’s cowboy jobs was fixing fence and bucking bales. Of course, the Army decided to make me a Combat Engineer so I could build barbed wire barriers and stack sandbags.

So began a very long week. The one bright spot was the SFC remarking, as an NCO, he couldn’t knock sense into a trainee. On the other hand, as a Private, I could so long as he didn’t see it (hint, hint, hint).

Interesting time in that training cycle. We were mid cycle when President Kennedy was murdered. Prior to that, I was well on my way to not earning a Good Conduct Medal (drowning a civilian in edible garbage https://wellseasonedfool.blogspot.com/search?q=KP)

among other misdeeds that weren’t in accord with good discipline, etc. insured that.

I think the real reason I graduated was to ship me off to be someone else’s problem (hello, 814th Engineer Company).

Enroute, the unauthorized absence at Ft Dix waiting to board a troop ship wasn’t well received.

My partner in crime, Tom O’Connor, understood shipping schedules and thought three days in Boston seeing his girlfriend beat three to four days of shit details at Ft Dix. Can’t have your buddy facing danger alone, can you? Plus, his girlfriend had a cute sister. We managed to bluff our way out of that. Easier to throw us on the bus to the Brooklyn dock then do all that messy paperwork. 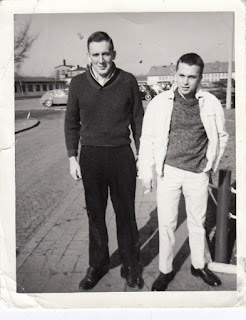 In a way, being in the engineers was a stroke of luck.  The engineers were a rowdy bunch, from the lowest private to the First Sergeant. If you were a worker, did your job and could be counted on, many things were overlooked. If you were a slacker, life got real hard real quick.

Just to be clear, choices were to volunteer for the First Sergeants extra hour’s projects, or see the Company Commander for an Article 15. There were no free rides.

LL mentions landmines. Most had been cleared by the time I was there. One place, not so much, the Hurtgen Forest. Horrible WWII battle, 30,000+ Allied casualties. In 1965 there were still areas fenced off. We spent ten days there. We would take a section a meter wide and work our way through in a straight line stringing det cord behind. Move over, do the same, etc. After ten or so corridors, the det cord would be set off and the Munson effect would (in theory) set off anything explosive.  Nasty work. Hell of a way to make an extra $55 a month. Our equipment was all WWII vintage plus ice picks for probes. The place was littered with moldering military detritus. We left it alone and worked around it. That old helmet just might be booby trapped. I was glad I only went there once.

Old AF Sarge is writing stories about  WWII and one place nearby he uses as a scene is Kreuzau. We bivouacked nearby.

Worth reading his series, IMO.

Thanks for your references at clearing mines, and your experience. Since when was tossing a civilian into a dumpster an issue? Somebody must have seen you do it.

LL
The Mess Sergeant wasn't happy because the pots and pans weren't getting washed.

I had me a dose or two of that KP enlightenment myself. I recall that whole edible and non-edible business and civilians coming around to scoop up the left-overs for hog feed. But, I don't recall the Mess Sergeant being happy about much of anything to start with. After I got out and commenced to working for the GI Bill, a.k.a. college, I came close to marrying a gal whose daddy was a Mess Sergeant who the Army had for some reason or another singled out for Warrant Orificer and sent back to skool for a degree of some kind, I forget what. He was never happy about much of anything either, especially his daughter getting serious about a former SGT E-5. Oh well. It was probably for the best.

Www
I can't recall meeting any Army cook that was happy. As a separate status company, we had six cooks. When I was running Hq Platoon, the cooks, radio operators, clerks, and armorer were my responsibility when not working their jobs. The cooks were a pain in the ass.

Army food. We ate well because the cooks lived with the men they were feeding. The horror was a consolidated mess hall. Ghastly!

OldNFO
Not in the Army, unfortunately.