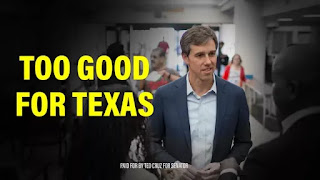 Watching parts of the 2004 Democrat National Convention, I found myself asking, “Who the fuck is this?”

It took awhile before I realized this was the start of grooming him to be elected President. Who was backing him?

I see striking similarities with the current darling of the liberals, Robert Francis (Beto) O’Rourke. He will probably  lose to Ted Cruz in his Senate race. No matter, his campaign has raised tons of money and his national profile is high and rising. Watch it grow in the next two years.

We are being played, IMO, and the forces that foisted an obscure Illinois Junior Senator on us are working to foist an obscure Texas Congressman on us. YMMV

Yep, they're 'setting the stage' for him... Kennedyesque is already a term I'm hearing.

And since he's from TEXAS, By God, they think that'll be good enough to slip him past us.....

Good to see I'm not alone in my observation.

Reinventing the wheel (sadly) has merit in political reality.

Nah, Beto's turn is in 2024, after the two terms of President Elizabeth Warren. What with all of that Native American blood coursing through her veins, she'll grab the minority vote, the women vote, and the idiot vote (a sizable block, take that to the bank).

Then Beto will cash in his political capital and take this country to places we've never seen (all bad).

Young pretty boys seem to work for Liberal Presidential Hopefuls. No substance other than their handlers, but look good in a suit behind a podium.

Fredd
Odds are I won't be around for the 2028 elections.

The Dems are all in a frenzy and cannot decide who to back. Should it be the shunned Bernie who was railroaded by Hillary and his own party? Should it be Tired Joe Biden who is just a flash of false teeth and no horse? Should it be Shillary who would set the win up for Republicans again? Should it be a new young gun-less lefty? Who? Who?

Keeps all us political junkies guessing.

Fool: oh, you'll be around in 2028: what with socialized medicine kicking in, they will figure out a way to keep you on this side of the green grass one way or another. Maybe cut your brain out from your diseased body and put it in a pickle jar, jab some electrodes in it and voila! Quality of life!... and you will still be able to vote.

As a registered Democrat, I will be voting in the 2032 election, just saying.