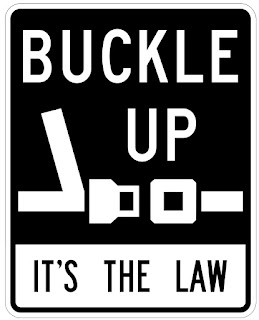 Then just this morning this from the Bayou Renaissance Man blog. (bayourenaissanceman.blogspot.com)

High School days, three Craig, CO residents in a new Chevy convertible were seeing how fast they could travel from Steamboat Springs to Craig, a distance of 42 miles. Going around a left curve the driver drifted onto the shoulder and hit a mailbox, set in a concrete filled milk can, directly in line with the steering column, which snapped. The car went out of control and they were ejected. One was killed.

The one killed was a good friend whose family had moved to Craig a few years before. His younger sister and I were Junior High sweethearts. The funeral was an open casket and his parents had the morticians NOT do any cosmetics. If their goal was to make us reconsider our ways they succeeded, at least in my case.

Posted by Well Seasoned Fool at 11:29 AM

You don't want them to issue you with a Darwin Award after you've shuffled off this mortal coil. It literally adds insult to injury.

I buckle up even if I'm just moving the car from the driveway to the street. It's just a habit I developed over the years.

My light turned on back when I was getting my pilots license. I realized I would never fly without my seat belt then why risk the even more dangerous road without one?

LL
Not what I want for an epitaph.

drjim
I'm not that disciplined.

Flugelman
Never, not once, failed to use a seatbelt. Even in a flu tube it stays fastened unless I'm using the facilities.

If you're retired military and get hurt in an accident not wearing a belt, you're not covered... 100% wearer here...

I own several antique vehicles (1924 and older), and never wear a seat belt. Not ever. Of course, these cars were never equipped with seat belts. Or heaters, brake lights, turn signals or air bags. Front and rear bumpers were optional, and rare.

And yet here I am, alive and well.

Of course, these old units have a top speed of about 40 mph (if you were being pursued by pirates, cannibals or solicitors). Cruising speed is closer to 33 mph, and in town 20 - 25 mph is more typical.

Moral of the story: don't drive cars manufactured after 1924 ever, or vote for Democrats, ever. (I just threw in that Democrat thing, seemed like the right thing to do).

Bet those pre-war hoopties are your first choice for Interstate Highway travel, correct?

Republicans - Conservatives: Fly your American Flag if you want to win!!

ps. Would you consider adding CC to your blogroll?

Fool: I exaggerate (i.e. 'lie') from time to time. No, I never take these units on any interstate, as that would be breaking the law (min. speed on any interstate is 45, these rigs just ain't up to it). And I am a law and order type of guy, as are most of the folk I associate (i.e 'hang') with. That, and I hate getting tickets.

In addition to eschewing interstate travel in a flivver, I don't drive them in the rain, snow, ice, sleet, or any other condition that is not sunny, over 68 degrees with zero chance of precip in the forecast.

Other than those exclusions, I take them everywhere I go. In other words, they get about 50 miles per year, if that.

Saying you don’t wear seatbelts but are alive and well is, in my opinion, rather like saying you smoke but do not have lung cancer. I find it amazing that in 2018 people are talking about not wearing seatbelts. I thought that mentality died out last century, along with drive driving!