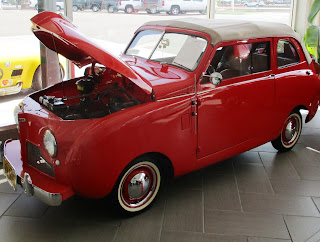 Conquest Classic Cars, Greeley, CO has an ever changing inventory of cars and trucks I like.

Just a few I snapped walking around today. 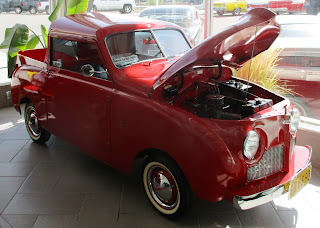 How often do you see two Crosleys, let alone a pickup? 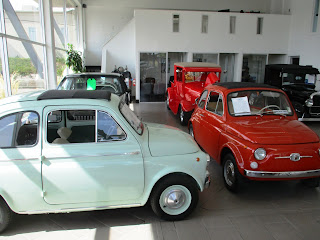 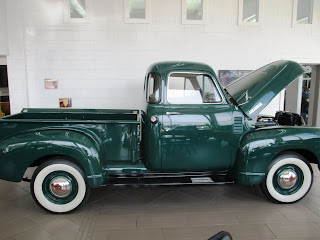 Yeah, it is a Chevy, but I would drive it. Those straight six engines were no dogs. 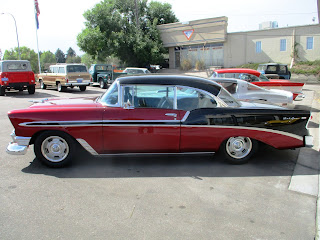 Again, not a Chevy fan but, damn! Bet some readers even know where the fuel filler is located. 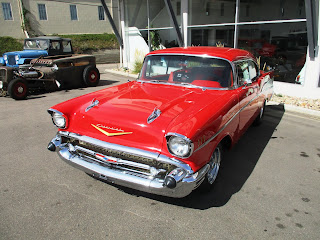 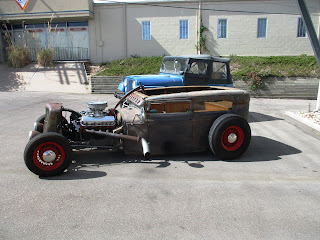 Fun as a weekend cruiser. Doubt I could get my old fat body into it. 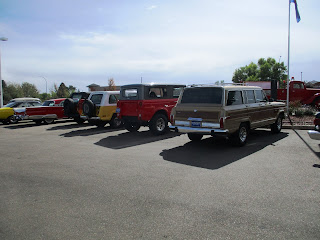 I drive by this store often. Next door is a gun store. Two doors down is the Post Office where I have a box. Lucky, in a way, I'm not rich. Temptation would own me.
Posted by Well Seasoned Fool at 2:19 PM

I've ridden in a Crosley "Hot Shot", but never knew they made a pick-up!

That is just evil temptation. I feel the same way as you do. If the bank account was overflowing, then the garage would be.

drjim
Not sure I've ever been in a Crosley.

Sisty
Would need to warehouse. No garage big enough.

Cool autos! Love them all. The little Fiats are so cute!

Those Fiats had 600cc engines and mechanical brakes. In a race they might beat a Citroen 2CV.

I would gladly abandon my old Explorer in favor of that Wagoneer. Been coveting one of those since my years on Adak.

Bring your checkbook, Rev Paul! You can buy completely remanufactured Wagoneers, but the go for $30~$40k.

Rev. Paul
My parents had two Wagoneers. The first was ok but the second had numerous problems. They sure were solid! My mother parked on a hill, didn't get it in Park or set the brake. When she came out it was at the bottom of the hill. Didn't harm the Wagoneer but didn't help the five or six vehicles it hit while rolling down the hill.

Glad I don't live any closer...LOL

They have a Austin Healey 3000 tucked into one corner I would drive if you threatened me.

Oh, YOW! A "Big Healey". Those things are a joy to drive considering their vintage.

Not real quick, not real fast, but just very nice to drive.

The car I got good at staging three downdraft SU carbs for the owner. Nice lady. She also had an MG TF 1500, another car I lust for. She was a lawyer and her husband an airline pilot. They had nice toys.

Placing that dealership between a gun store and a bar would make it "holy ground". Take your shoes off when you walk around the place.

Two bars in the next block the other way.

Had to replace the radiator in a Healey 3000 when working after school at the local Esso station. Barely enough room to do anything, lots of busted knuckles. Good times...

Hung around shops doing scut work to pay off my own repair bills. Wondrous British cars! You need three different sets of tools, SAE, metric, Whitworth. You were screwed if you lost a nut or bolt. Different threads.