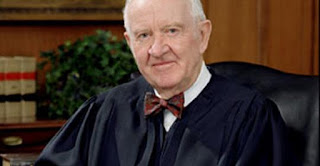 Retired Supreme Court John Paul Stevens wrote in an op-ed in the New York Times. On that single point, he is correct.

He goes on the regurgitate most of the (P)regressive gun grabbing talking points. Of course, the NRA takes a shot. For me, this takes him from a scholarly student of the law to a hack and besmirches whatever legacy he had heretofore.

There is a mechanism in the Constitution to repeal amendments. It has been used once, to repeal prohibition.  The bar, as it should be, is high.

To those who want to restrict or eliminate firearms, go for repeal. Convince the majority of the citizens your cause is just. Let the rule of law prevail. This is the honest approach, rather than your current efforts of death by a thousand cuts.

You will be vigorously fought but your opponents will respect your honest approach. In the unlikely event you prevail, the firearm owners, who are on the whole peaceable and respecters of the law, will grudgingly accept the outcome, IMO.

No, actually, we won't.
The Bill of Rights was written to codify what was accepted as God given (or natural) rights. It grants nothing, it merely states what the Gov must refrain from doing.
So if they manage to repeal it, it will be necessary to have another war to establish a free society.

The last sentence is merely my opinion. Your opinion is just as likely, and one I would support.

Yep, my post for tomorrow goes into what is actually required.

NRA donations and memberships tripled in February. Ammo and firearms are blowing off the shelves. Remington may emerge from bankruptcy. We saw that before with Barack.

Look forward to reading it.

Few votes count more than those cast by folks voting their wallets.