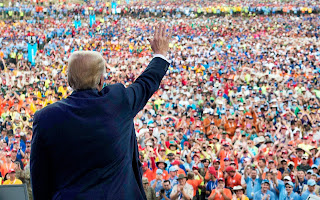 Escaping the norm, thankfully, is part of President Trump’s way of operating, IMO. Yeah, WSF is going off on the political climate in Washington, D.C., of which he knows nothing but what he reads. You have been warned.

You read about the “turmoil” in the White House staff. Cabinet members fired. Advisors come and go. All this is very upsetting to the political establishment and the deep state. They can’t grasp he isn’t one of them and never will be. They are not going to mold him into one of them and, from all appearances; he doesn’t give a shit that they are upset. I think this is a good thing.

Looking in from way outside, I see the overall culture in D.C. is, “Go along to get along, and we will all make money”. Few leave D.C. poorer than they arrived, don’t you agree? President Trump isn’t one of them. I doubt he is doing anything but losing much of his wealth by serving.

I find him to be completely sincere in what he says and how he goes about doing it. So refreshing to hear words not focus group tested, polished, and not read off a teleprompter. His predecessor couldn’t string three coherent impromptu sentences together without rehearsals or a teleprompter.

Those of us in the private sector who have been fortunate to work for kick ass entrepreneurs know they don’t suffer fools and don’t let problem situations fester. It is their way or the highway until, and unless, you have proven to them that your judgment has merit. They put their asses on the line daily and so should you. It isn’t a comfortable environment.  The “in crowd” hates being in this position, IMO. My response? Tough shit! Grow a set.

I read Dick Morris daily. He isn’t always right but generally has something thought provoking. Plus, he is a far better writer than me. He had an interesting take on this subject today.

President Trump’s biggest sin? Making a whole swath of our population of self important assholes irrelevant. They will never forgive him, poor things. Bless their hearts.

President Trump doesn't suffer fools and he 'doesn't need HANDLERS' in the way that so many presidents before him did. The Deep State views that with profound suspicion.

Yep, stirring that hornet's nest inside the beltway is ALWAYS interesting... LOL

That hornet nest needs a good dose of wasp spray.