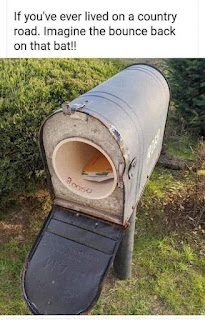 This picture was on Facebook, and it brought back an unpleasant memory.

Local kids in the Colorado Yampa Valley (Steamboat Springs, Hayden, Craig) wanted bragging rights on how fast they could drive the 42 miles between Steamboat and Craig.

Westbound out of Steamboat three Craig kids in a 1960 Chevy convertible slid off the corner just past Hwy 129 and hit a mailbox much like the one in the picture. They hit almost exactly in line with the steering column breaking it.  With no steering control they went into the ditch and rolled several times. One passenger was killed.

The mailbox owner had grown weary of having his mailbox knocked over by careless/malicious snow plow drivers. He put out such a stout mail box it would cause a snowplow truck to pivot.

The dead passenger had recently moved to Craig from Steamboat and was one of my best friends.

His parents insisted on an open casket at his funeral and made sure all us hot shots filed by. The funeral home workers did not do any cosmetic work on the face.

I've replaced my box twice.
Yes, it's irritating. My latest is made from nearly unbreakable plastic and is assembled like a puzzle. If "mailbox baseball" players hit a home run, I stand a pretty good chance of being able to put it back together.
A friend simply built his entire mailbox out of bricks, including the support structure.
Expensive, but no more repairs.

I actually had to move mine to the side street to keep from losing one a month... My neighbors across the street went with brick ones!

GB
Makes you wonder about people.

OldNFO
I have a cousin who is a rural carrier. She has some stories.

I can imagine... Down here it's wasps and scorpions hiding in/under mailboxes because of the 'relative' coolness...

The Compound's mailbox is on the porch and, more frequently, in a PO box at the local post depot.

Speaking to NFO's point, I was once hearing a Confession when the teenage girl became strangely moved. "The Holy Spirit?" I asked, wonderingly. No, a scorpion scuttling across the floor to the kneeling penitent...

LSP
LOL. Did you arrange that?