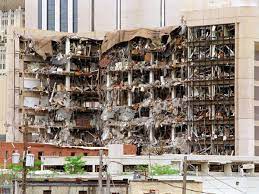 Yesterday was the anniversary of the Oklahoma City bombing.

Does history repeat itself? Sometimes events of the present resemble past events. The “repeat” parts are when you see present day patterns that resemble past patterns, and wonder if they foretell future events.

OK, WSF, get to the point. Ruby Ridge 8/92, Davidian Massacre 4/19/93, and the Oklahoma City bombing two years later on the anniversary of the Waco massacre were interrelated.

Ronald Reagan was no friend of armed citizens. As California Governor, he rammed through firearm laws we are living with today. This was in response to Black Panthers exercising their 2nd Amendment rights by open carrying at the State Capitol. Think I’m wrong? Check it out.

As President, his administration’s pawns went after any and all perceived anti-government factions. In fairness, they went after both left and right.

Jimmy followed much the same path and both Ruby Ridge and the Waco massacre occurred on his watch.

Clinton carried on with a name most of us recognize, Eric Holder, who was at the time Assistant Attorney General.

How long will it be before SloJo and Ho push citizens to act once again, ala Oklahoma City? I see history repeating itself.

A personal footnote. Before and after the OKC bombing, part of my work involved a lot of contact with “civil servants” at all levels of government. After OKC, at all levels, they suddenly became very helpful and friendly; doing their best to serve the public. That lasted for two or three years. Then gradually it went back to, “This would be a great job if we didn’t deal with the f**king public”.

Historians tell us the American Revolution only involved about 13% of the population. Few were trained military veterans and they were up against that era’s best Army. Consider the chaos 13% of today’s population can create.

Consider just one target, the massive computer center at Bluffdale, UT. All those computers need to be kept chilled. Water is used. The facility has just one water source.

(Hey LL, that above should suffice to get me a prime cot/pallet spot near the stove)

Thank you for your patience in reading all of this.

I think that they'll take the thin straw mattress away from you at the camp.

The Bluffdale facility is iconic. Your tax dollars at work. And when you think about it, the FEMA camp you're headed for will employ people as well...

LL
I wonder if there will be an outlet for my CPAP?

Easier to get power substations... a couple of rounds from long range, poof... No power, it no workie... And yes, 13% was all that were involved in the 'guerilla actions that started in 1775. Think about what ONE rogue cop did to LAPD/LASO a couple of years ago.

OldNFO
Just thinking a trained pilot in any number of different civilian airplanes could drop an improvised bomb with considerable accuracy, especially with a helicopter. Backup power is likely but backup pumps?