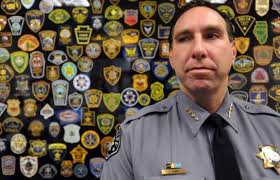 He sounds like a good old-fashioned Sheriff, who I always considered to be equal parts of "Law Enforcement", and "Peace Officer".

Thank God, and literally, that there are people like him.

drjim
You are reading him right. An adopted niece made a distinguished career in that department and credits him with much of her success.

Sounds like a good man, and you misspelled a word. It should be FIRED not hired... But we get your meaning.