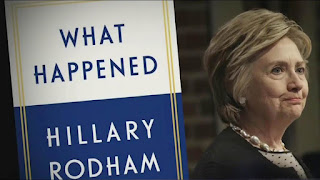 Now available as an audio book, 14 CD discs, read by the author herself, and on the shelf at my local library. Made me gag.

Audio books make the medical courier route drive more pleasant and helps keep me awake. Being cheap, I source most from the local library.

Can you imagine voluntarily listening to that woman’s voice for three to four hours? Just the voice, not to mention the self serving lies, blame placing on others, and justifications for her utter arrogance would cause me to drive off the road. YMMV
Posted by Well Seasoned Fool at 3:47 PM

Listening to her (or Barack) is like nails on a blackboard.

Definitely not a Hillary fan.
It amazes me how many people still think she didn't win because somehow 'they' cheated. She didn't win because the Democratic party waaaaay underestimated how much the Clinton Dynasty is hated. And for good reason(s). Some people *are* really stupid. But there are many out there who see her for what she is and voted accordingly. I'm not a huge Bernie fan, either. But I would bet money that had it been Bernie against Trump, Bernie would have won.

I wouldn't listen to 30 seconds of Hillary. Or Billary. Or any of them, really. I'm allergic to bullshit.

All during the campaigns I was steadfast, "Anyone but Hillary".

While not a fan of President Trump, the person, I think he is doing a good job. Of course, after the past eight years that isn't a very high bar.

There is that. Listening to her "base" the impression is they love the idea of Hillary, not the person.

Not a bad idea.