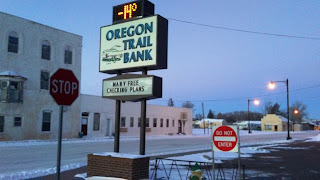 Guernsey, WY this morning at 0630. Cold enough folks were zipping up their jackets. Hope it warms up by Monday when I go back to work.

My employer runs a low overhead operation but doesn't stint on maintenance and tires.  The ice grip tires on the Yaris go for $100+ and work well. I prefer studded tires and the owner doesn't. Oh well.
Posted by Well Seasoned Fool at 4:44 PM

> -14 deg
>> Cold enough folks were zipping up their jackets.

"I saw my logger lover go striding off through the snow.
Going gaily homewards at 48 below.
Well, the weather it tried to freeze him, tried its level best,
At a hundred degrees below zero he buttoned up his vest."

Wow, that's 'chilly'... To put it mildly. I'll stay down here where it's warm, thank you very much.

Are you home for 4 days or is it 4 days at a more distant location?

Thankfully, no wind. Northwest Colorado's Yampa River drainage gets much colder. My father had a recording thermometer that went to 45° below. We saw it stuck there more than one. Further down the river at Maybell the temperature went below 60 and stayed there for several days. Believe that to be a state record.

At home. I decline all out of area assignments.

Living outside Chicago, anything above 20 degrees Fahrenheit seems reasonable.

A matter of perspective, I guess.

And NO: I am not going to call bums something less offensive like homeless, or housing challenged. I like the word bum, it has a sigma that is well deserved.