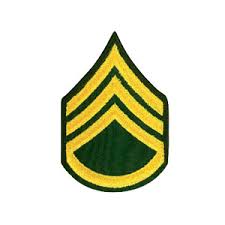 One of the fun things about blogging is poking good natured fun at other bloggers. Of course, you must accept it coming back at you with interest!

We have gone back and forth about starched fatigues, haircuts, bloused trousers and spit shined footwear.

My Army service was 1963-1966. We were a large Army then, and filled with people who were drafted. Drafted troop’s motivation was suspect. It wasn't until I was out a few years that I began to understand why the NCOs were so adamant about appearances. It was all about installing discipline, unit cohesion, and unquestioned obedience to orders. When an NCO hollered “frog” you didn't ask why, you jumped. Have a slob in your squad? Kick his ass until he got straight, or spend considerable time in uncomfortable physical conditions. Yeah, mass punishment. Can you spell, “Front Leaning Rest”? “Double time, harsh”?

I had NCOs that were both WWII and Korean War vets. Many more were Korean War vets. They had first hand knowledge of the consequences of lack of discipline, unit cohesion and not instantly obeying orders. Perhaps they were training to fight the last war but they damn sure weren't going to lose that last war. Bayonets may be obsolete, but twenty hours of bayonet drill will change your mental outlook.

Consider for a moment the job of an Army line NCO. The smart men were joining the Air Force or Navy. We will disregard, for the moment, the particular mind set of the men who joined the Marine Corps. The line NCOs took whatever the pipeline gave them and made soldiers out of them. First, they made everybody tired and kept them tired.  Then they pounded in the lessons one bite at a time. That carried on through advanced training, at least in combat arms, and on to the line units.

In my float bridge company in , we operated in two states, field or garrison. In the field we worked. Appearances didn't matter, clean or dirty uniforms didn't matter, and spit shined boots didn’t matter. In garrison, it was just the opposite. Why did I work hard on my appearance? Every NCO had a hammer and I didn't want to look like a nail.

I have a friend who was a Marine for ten years in the 80’s. He tells me the Marines were much the same except recruits were already of the mindset the Army NCOs had to force.

My friend and I do a lot of teasing. One year, on the Marine Corps birthday, I called him. The conversation went like this.

I happened to be at his house this past Sunday and pointed about it was the birthday of the SENIOR service.  All I heard was some mumbles.

My view of today’s Army is that, for the past two decades, they have shown they're damn good at what they do. Hopefully the next administration will quit smelling unicorn farts and let the military be military and not a social Petri dish.

For everyone who has served, thank you.

Posted by Well Seasoned Fool at 11:01 AM

Labels: US Army, US Army training

The Army has done a thing or two in keeping us free, fat, and happy, despite Obama. The USA and the US Army will be strong again. Thanks for setting the Marine straight... though you usually have to tell them two or three times.

I will be seeing that Marine this week and will pass on your remark. Somehow I suspect his response will have squid in it.

Agreed! Let the folks DO their jobs! At least you guys can march... The Navy, not so much- That's what Marines are for! :-)

A line I heard long ago: "My dad told me there are only two branches of the military. The Army and the Navy. The Air force is a corporation and the Marines are a cult".

Hey WSF! How do you have time to blog? Shouldn't you be shining your brass or something?

I can type when I'm not wearing my Air Force mittens. My 50 year old brass is in a jewelry box already shined and lacquered ready for inspection. Just haven't found a way to spit shine New Balances.

My father was in the Army during WWII. After the war when the AF was spun off from the Army Air Corp into its own separate service he transferred over. When asked why, he said "I'm tired of getting shot." (He had two Purple Hearts.)

I didn't listen to him. I joined the Army instead of the Air Force because back then (late 60s/early 70s) the initial term of enlistment for the Army was 3 years. For the AF it was 4. I opted for the shorter term just in case I didn't like the military.

My father was drafted into the Army and ended WWII in the Army Air Force in India. He always referred to himself as an Army vet, never Air Force.

I made the same 3 year/ 4 year decision.