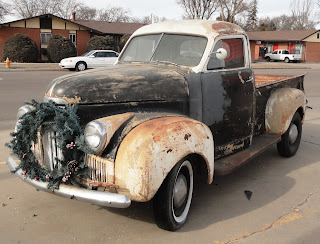 Saw this old relic today and it started a trip down memory lane, riding in the bed of my maternal grandfather’s yellow Studebaker pickup. 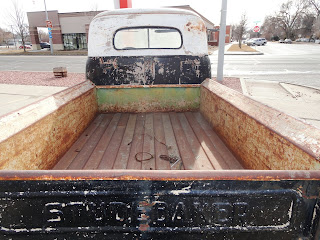 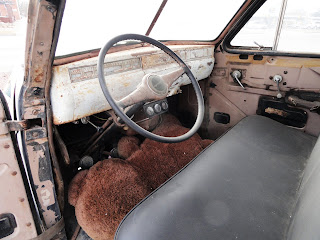 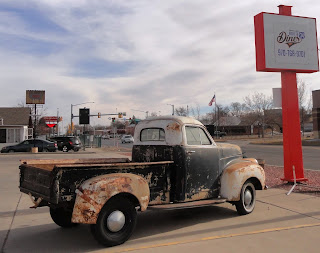 He had a ranch east of Saratoga, WY and the summer I turned eight I spent a month there.

WATER IS FOR FIGHTING 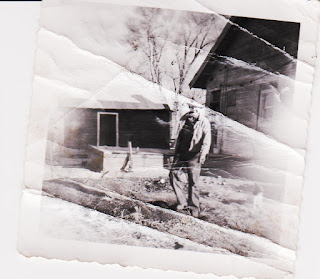 Granddad Burtis had the oldest water right on the ditch that served several ranches. He was also the last one on the ditch. We would go out to irrigate and he wouldn’t have all his water. Cursing, he would jump in the pickup with my Uncle Ray and go tearing off to the headqate across fields and along rutted county roads. Riding in the pickup bed were spools of barbed wire, long shovels, pry bars, fence stretchers, dogs and grandsons all being churned as the load bounced up and down.

Grandad was a big man and Uncle Ray about 6’5” with shoulders so wide he went through doors sideways. Hence, there were rarely physical confrontations with the other ranchers. There were rich vocabulary lessons in words and phrases not to be used in polite company as the topic of; “water thieves”, was given a through airing.

When I first arrived, I was given a rusty irrigating shovel (a long handled pointed spade). I was made to understand rust on a shovel was nearly a mortal sin. Message, work that rust off. Granddad wasn’t real pleased to find me in the shop using the pedal powered sharpening wheel to do a little rust removal.

WHAT IS A MAN?

I last saw him Christmas 1962. They were visiting my parents in Steamboat Springs, CO and I came up from Denver in my red sports car wearing “city clothes”. He was distant with me. My Dad had a pickup loaded with stoker coal backed up to the coal shed and asked me to unload it.  After changing clothes, I was shoveling about a ton of coal when Granddad came out and watched me.

What a great post, you brought the scene alive. And now I'm imagining his reaction to the way things are now, probably not too favorable.

LSP
Thank you for the compliment. Era Burtis was an orphan who drifted into CO as a cowboy. He was extremely conservative.

Most everyone thought he was French. Several of my cousins and I have done the Ancestry.com and there is no French or Indian anywhere.

Old NFO
Thank you! A compliment from one of my favorite authors means a lot.

What a great story, thank you for sharing it. Your grandpa sounds like quite a man.

Your story brought my own grandfather to mind. I miss him, of course. It would be very fun to spend time with him at the White Wolf Mine. Of course, my relationship with him makes it incumbent on me to be the grandfather to my grandsons that he was to me.

And that's sort of the point of passing it on.

Brig
That man had to overcome so many obstacles in his life. An inspiration to his many grandkids.

LL
Excellent point, passing it on.

WSF You can blame LSP for this post, I saw it in his links.

Your post brings back many memories, I am a 5th generation dairy farmer in west central Ohio, dairy farmers on both sides, and 1/4th french to boot. My paternal grandfather was long gone before I was born, However my maternal grandpa was a good man and quite a character, short dark haired frenchy, and ornery, but one hell of a hard worker, he and grandmother worked the farm and milked cows all their lives,also had hogs and chickens. I used to stay with then at times and help them with the work, If he started telling stories everyone would gather around, he was hilarious,
I now understand what he meant by "it's a pleasure to see your children and grandchildren work" . My 22 year old son is taking over the dairy operation from me in steps and there is no greater pleasure than seeing you son work. My dad passed away suddenly at 84 yrs old two years ago and sometimes I think he thought more of my son than me, he took over this farm when he was 18 and owned and farmed it till he was 78. Yes to see the next generation work up a sweat is a good thing and yes it makes them MEN.

ERgyptain
Welcome, and I'm glad you enjoyed the post. Dairy? hard, hard work. We just had two to three cows and hand milked.

My kin will tolerate most misfeasances and malfeasances but will ostracize anyone who shirks hard work if it needs done.

I spent many years selling cars and my two younger sons were put to work as "lot snots" every day after school and weekends. They knew how to work.

He was from a time when Men were made of 'sterner stuff' than most are now.

I never met my mother's father, as he had passed before I was born. I kind of knew my father's father, but he passed when I was 4 or 5, so I barely remember him.

drjim
My father lost his father at age 16 or so to lung cancer.

Grandad had the biggest hands and I was always a little scared of him. His favorite thing was to use his pocket knife to remove any scabs that you might have. He used that pocket knife to carve animals, a wagon train (complete to the harness & pots & pans) that most folks would consider primitive. He also made a cedar corner cabinet - 6' tall- with using a piece of glass to plane the wood. He was quite the man.

He enjoyed making things from scratch. Doubt he ever used someones plans.

Scary? Damn right, he could be scary!

My Grandpa used to cut up an apple for us kids with his pocket knife, and when asked he'd say "of course it's clean i just got done castrating pigs with it" His favorite treat was fresh onions or radishes straight out of the garden, he'd pull them rinse them off at the hydrant and eat them, the onion like an apple and just pop the radishes like cherries, us kids would about gag. He liked to do woodwork when he had time, built a lot of buildings and farm equipment himself and played a mean hand of "sheep head". Similar to Euchre. Family get togethers included at least two tables of sheep head going and the yelling and whooping rang through the whole house. Us kids got fresh popcorn (popped with lard) and coolaid, and had run of the basement. Oh good times long gone

Egyp
My Grandma was strict temperance but a great "ranch" cook. From time to time we would come up from CO for a few days. At the time my Dad was a railroad foreman but a cowboy at heart. I remember springtime branding and castrating - also pronghorn poaching.

Good country for sheep and cattle, alfalfa, and native hay.