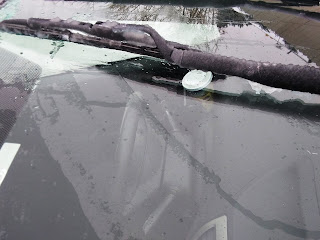 The company who employs me once a week as a medical courier is a low rent operation. I don't mind being a low rent type myself. That said, there are limits.

Friday night into Saturday we had a nasty ice storm. Just below freezing with a drizzle. The above picture shows why I buy wrapped winter windshield wipers. Ice forms inside the blade holder and the blade won't make contact. 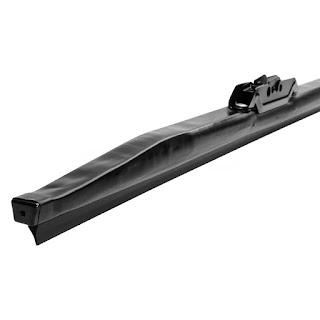 OK, I can live with the wiper blades. PITA but work around. Not acceptable are tires. 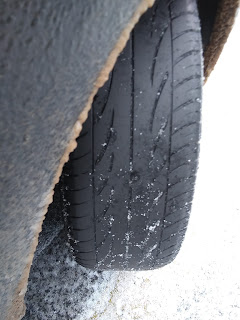 I've written up the tires on the Daily Driver Log for three weeks. Nothing has happened. Today I sent my "boss" an email that reads, in part,

"Not trying to create drama. That said, I will not drive the route again on those tires"

I've been driving this route going on three years. First, for my current employer. Then for the competitor that underbid them. Next for the company that bought out the competitor. Lastly, back to the original.They won the last bid. I might know what I'm doing.

My next scheduled trip is the day after Thanksgiving. I'm looking forward to the pre-trip inspection.

And, yes, I was a damned fool for even leaving the lot yesterday on those tires. 400+ mile in Colorado, Wyoming, and the Nebraska panhandle is no place for worn tires regardless of the road conditions.

Posted by Well Seasoned Fool at 10:29 AM

Are those wiper blades the same as the "winter" ones I've been using here? I seem to recall the new ones for the wife's car and my Jeep are kind of "sealed" looking.

Tires.....yeah, gotta put her studded snows on. She drove up to Bellvue last night, and had her first bad Colorado winter driving experience involving black ice. Everything's OK, but she scared herself silly a couple of times.

I wanted to put them on last week (Mid November!), but she waved it off saying there wasn't enough snow yet.

Any type of wrapped blade that keeps the ice out of the springs and clips helps. Silicon blades work better last longer than rubber.

I am a big fan of Rain X. I also wipe down the wiper blades with it. Helps.

My middle son was uncomfortable driving on icy roads. Put studded tires on all four corners on his car. After two years, he is far more confident driving in the winter.

OK, those are what I have. I never heard them called "wrapped" before.

Last year she bought 4 Hankook studded tires on steel rims. They give the car "cat claws" when icy, but make a lot of racket from the studs. She had zero issues driving with those tires. This was the first time she ever drove in snow/rain/ice on regular 'summer' tires, and she freaked out pretty good!

I don't know if "wrapped" is the proper term but find it descriptive.

It sounds like a suicide run with those tires.

LL
Poor people have poor ways and I've driven on worse. Doesn't mean I'm not a damned fool for doing so. Family characteristic. We will get the job done or die trying.

Wow, those are a tribute to your driving skill. I wouldn't have pulled out of the yard on those!

Old NFO
Only real skill is anticipation. Like in flying, stay ahead of the airplane.
In the day in question, the starting conditions were marginal but doable and the forecast optimistic. I'll give my employer the benefit of doubt but next trip, no.

Several states have made studded tires illegal.
Here in Michigan, if you come from a state where they are legal, as long as you still have that states plate you can use them.
The main reason for not allowing studded tires is that the studs ruin the roads surface.

About the best snow tires that you can buy are, Bridgestone Blizzak's. A little costly though.
They are not all season tires, you change them out when spring arrives and put them back on in winter.

You remind me -- must change out the tires on my rig...

A snowstorm in Texas? I would shudder to be on the road.