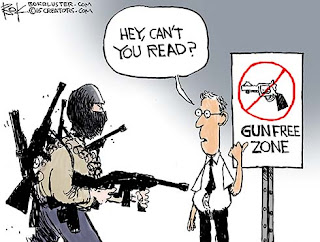 Starting with a side rant, possibly pointless. If more people did 50 push ups on crushed gravel on a hot Ft Leonard Wood afternoon, they wouldn’t call anything not a smoothbore a “gun”.  Just saying.

No outright ban and confiscation is the “compromise” the firearms control crowd offer. All the rest of their rhetoric is bullshit. They take each and every concession as a weakness and push for more. Since they are not honest, or respectful of any opinion not in line with their own, no concessions should  be made, IMO.

This creates a more dangerous situation. All of us active shooters know of the dangerous idiots out there with access to firearms. I personally lack the courage to ever be a NRA Range officer. Any fool that can pass a background check and has the money can equip themselves with lethal machinery and not have a clue as to safety, or even care. Whee, adrenaline rush.

In a more perfect world, no one would possess a firearm without training and proven competence, IMO. Ain’t going to happen. Anything like that will be grabbed by the Chuck Schumers of our country and used to advance their agenda.

What to do about “gun violence”?  At every opportunity blame the gun grabbers.

“Hey, Mr/Ms Gun Grabber, that death is on your door step. You, with you self assumed moral high ground and the conviction your feeling are facts, won’t heed the voices of those who actually know what the hell they are talking about. This is your outcome.”

We should take a page from President Trump and go on the offense. Build a case that we have solutions but the Schumers of our country are the obstacle.

I recently put up a post, “Buck No”, about the congressman from my district voting against the National Reciprocity bill even when he was an original co-sponsor. Was it flawed with being tied to ‘improved’ background checks? Undoubtedly. When has any legislation been perfect?

WSF, you are arguing against yourself. True, but our fellow citizens whose opinions differ still have a voice that should be heard. Not all are demagogues. And maybe, just maybe, they should be heard by firearm advocates. Yeah, pay those traffic tickets. Show you are a responsible and sane citizen. Your right to bear arms comes with an obligation to bear those arms responsibly, not scare the shit out of your fellow citizens.

Let us understand not everyone calling for “gun control” is a Chucky Schumer. If you want to create one more, let that soccer mom who may be ambivalent now believe her children are in danger. She is the one who needs to know what makes a safer place for her children. How? One on one. Be prepared to talk to those who may have an open mind. YMMV
Posted by Well Seasoned Fool at 9:34 AM

This is my rifle, this is my fun.
One is for fighting, one is for fun.

I always considered that both were for fun, but that's me.

Well, there is that.

Never minded the push ups, it was the gravel that was a bitch.

Took my basic at Ft. Ord, CA. Our push ups for just being an effing maggot were done in nice, fine beach sand.

Cooling to the touch, nice and warm California sand. Ah, like being on vacation.

Now, Fort Lost in The Woods gravel, that stuff sucks.

At least it wasn't Ft Polk.

Was here Sept - Jan. Only time back was in the summer when my son graduated Basic. Didn't like it once again.

There is no dialog. That's the worse and most dangerous thing. The poor little scared people (Eww!! Guns are like, all icky!! And Scary!!)aren't willing to listen. At all. Unless you share their exact views.

And then there are people like a relative of mine who have a goddamn arsenal and go out and blow away trees, assorted animals (not for dinner) and things like washing machines found out in the forests.

And then people in the middle who *would* talk. Dialog. Try to understand the real issues. Of course we get shouted down.

Because it's either 'guns are scary!!' or 'when you pry it from my cold dead fingers'.

In our house it's 'eff you... I WILL defend myself'.And that's what they're really for.

Yep, there IS never anything short of complete bans that will be acceptable to them.

It is a people problem, which they are unable to solve. They focus on what the believe they can do, remove firearms.
The root cause is economic. People with no hope see no reason to obey laws. A case can be made that the illicit drug trade is a manifestation of the entrepreneurial spirit.

Talking one on one is fine, but they don't want to have an honest discussion, ever.

Never been back to Ft. Ord. Not particularly fond of my time spent there, in the early 1970's, army boot camp was rough; not like the peaches n cream treatment that recruits get at basic nowadays.

Hell, they aren't even called maggots anymore. What's up with that, Fool?

Yup! Makes you feel like a Mormon missionary sometimes.

I've a lot of respect for those now serving. Once hoisted my son's "battle rattle" and Kevlar helmet. Way more than I ever carried.

Even if they wanted to have a conversation about it, they would never realize facts and only play to their spin.

Correct. Will have a post up later about it.