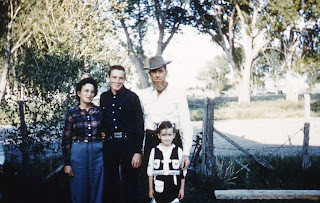 This picture is from 1958. In honor of the Colorado Centennial, a lot of men grew beards.

My father passed March 21, 1985 from heart failure. In hindsight, undiagnosed sleep apnea was the underlying cause. Age 64.

He was a good and honest man. Given to outbursts of temper, he seemingly didn’t hold grudges on a personal level. He grew up in the Great Depression in a “Grapes of Wrath” level of poverty. His own father died when he was 16.

For many years he supplemented the family income by shoeing horses and was highly regarded as a fairer. As a horseman, he had few peers. He had a gift for languages and came back from the China India Burma theater speaking several variations of Hindustani (which was his favorite for cussing). Later he acquired peon Spanish and a working vocabulary of Navajo.

As a hunter he had few equals. Best shot I’ve ever seen. We would go to the range and I would kill paper way better than him. A bunch of elk running through aspen? I killed trees and he dropped meat.

The night he died I was sleeping in a motel in Yakima, WA and had a strange dream I never had before or since. I seem to be immune to any kind of paranormal experiences so it sticks in my mind.

Like most folks who has lost a parent  I miss him and wish we had more time together.
Posted by Well Seasoned Fool at 5:32 PM

That's always the case... And not surprised at the shooting ability. Life was hard in the depression...

"He was a good and honest man."

That's as good an epitaph as I've heard. RIP indeed.

The depression made sharpshooters out of many men. I dad did not care for hunting, other than rabbits (they eat the crops), but he did it just to feed my brothers and sister back in the 30's. He said his feelings about killing one of God's creatures was put aside so he could help feed the family. He had a job driving a truck, but they didn't pay much. You know the story...

Up until I was around five years old, I called deer, "Bang, bang cows". My father and his brothers were some of the best subsistence (poachers) hunters to be found.

My favorite Brudder,
The picture was taken about 1960 when Dad ran for sheriff. You weren't that young in 1976...ha, ha!!! Be that as it may, we both miss him so very much for different reasons. However, he did instill our work ethics, respect for animals and "git er done" attitude. If we could only handle a shootin iron in the field like he could. Most of his grandchildren missed out learning about life from him. One thing that he never did teach us...the meaning of the word - QUIT. Glad you and I still have each other to help and harass as only a brudder & sisty can do.

Think you are wrong about the date. Maybell Family Reunion. By 1960 I was taller than him. Otherwise, I agree with the rest of your comment.

Aw. Nice tribute to your dad. Love your sister's comments. LOL. You keep digging a bigger hole with those dates and I'm going to come to the conclusion you are 100 disguised as a 29 year old.

After getting beat up by my sister, I changed the photo date to 1958. Damned if I can remember why he grew a beard that year.