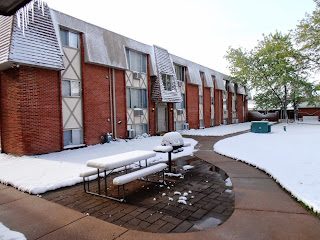 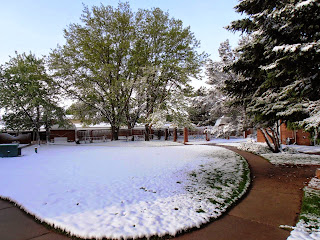 This Mother's Day morning. Springtime in the Rockies.
Posted by Well Seasoned Fool at 8:00 AM

I didn't. That is why studded tire stay on my truck until well into June.

Also so you can say you're studly?
:)

When I'm driving my truck. Otherwise, ???? At my new job, I mentioned I was hired for my rugged good looks, not my smarts. The women there expressed opinions that I failed on both points. Bitches!

Well at least you don't have tornadoes like we do.

In other words, quit yer whining.

????Several in the next two counties to the East.

Whining? More like acute observations. Besides, who chickened out and moved to the Midwest?

There's a reason I left the north and moved to Florida!!

And I hope you enjoy it. I don't do heat and humidity and would rather be in a Wyoming ground blizzard. A memorable miserable time was Corpus Christi in July.