Tired of Being Called a Racist 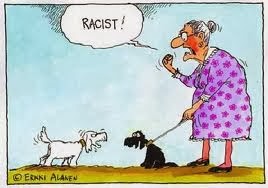 I’m so tired of being called a racist when I criticize Obama. Why does he get a pass because of his skin color? How racist is it to think, or say, someone’s performance can’t be discussed because of their race; that they are somehow inferior and need to be protected? That they are judged by a lesser standard? That is plain bullshit!

Any long term readers of this blog (boy, are you a glutton for punishment) know I criticized George W. Bush. His assault on the Constitution by way of his “signing statements” was as wrong as Obama’s trying to rule by fiat.  The economic mess created by removing the firewall between commercial and investment banks continue to drag us down. The end game on that is financial ruin for the common citizen.

Methinks the Obama supporters are beginning to sense the disaster that his administration is proving to be, and they can’t stand the idea they were duped. It’s time for that Egyptian River.

Now, when they play their race card, my response, mentally or verbally, is, “Is that all you got?”

Am I a racist? Most assuredly, I have some deep seated racist thoughts and feelings. I can say I have never discriminated against anyone in the workplace based on their skin color, ethnic makeup, religion or sex.  Socially? I hope not. I do reserve the option of treating assholes like assholes, and do so with some vigor.
Posted by Well Seasoned Fool at 10:44 AM

I am sick of being called racist, too. I have made no secret that I hate obama and what a shit job he's done. I'm sick and tired of being fucked by the people who are supposed to represent us but do nothing but take care of themselves.

I hate him, but I don't care what color he is. He'd be an asshole in purple, too. Or pomegranate. Or orange. Whatever.

A failure is a failure.

Think we are both more race neutral than anything else. Not good enough for the, "If you aren't part of the solution, you are part of the problem" mindset crowd. Their solution is the only solution. Fuck em.

You do have a way with words, and I do agree.

I read in a comment thread someplace. "I'm not a racist, it's Obama's white half I hate"....it put a smile on my face.

Humor with a bite.