A Good Man Is Gone

Former State Senate Majority Leader (CO) Ken Gordon has passed away at age 63 from a heart attack. An unabashedly liberal Democrat, he was fiercely independent and a man of high principals. In some ways, he was a Don Quixote politician refusing to accept PAC monies and fighting to take big money out of politics. The organization he headed was Clean Slate Now.
http://www.cleanslatenow.org/ 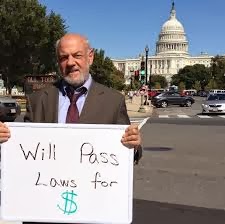 He was admired and respected by people across the political spectrum.

Had the jackasses who recently got themselves recalled modeled themselves after the way Ken Gordon served in the Legislature, they would still be in office. When he became Senate Majority Leader, he refused to let his fellow Democrats drub the GOP legislators. "They did it to us, " they said to him. "Yes they did, and it was wrong. We don't need to be that way." He mentored the new House Majority leader to lead the same way.

He could disagree without being disagreeable. He accepted other people had different views and worked to find common ground. Too few moral people go into politics. The country needs more Ken Gordons.


Posted by Well Seasoned Fool at 9:29 AM

May he rest in peace, knowing he did the right things!

Ken's longtime companion posted this to his Facebook page.

Whenever I asked Ken what he was thinking about, he would either say Democracy or Michigan football.

I often felt like I was dating Superman who fought for truth, justice and the American Way. Not only did Ken work tirelessly, with unwavering commitment, to forward his worthy principles, he admired others who did the same, even if their beliefs were not in alignment with his own. Ken was the most ethical, decent man I have ever known.

Ken felt he was never doing enough to save democracy. He remarked in speeches that everything we care about depends on our capacity to have an equal voice. He was consumed with concern that Congress, those who were supposed to represent the American people, was not comprised of meritorious people, but by fund raising personalities who were beholden to special interest money, not to the well-being of Americans or true national needs like education, clean air and water, health care and, my personal interest, people with disabilities and others with long term needs.

So, I loved and appreciated Ken for his beliefs, his intellect, his humor and extraordinary morality, and I loved him for his steadfast commitment to his friends and family, his football team and to me and my son, Eli. Ken was Eli’s co-guardian. Eli requires 24/7 line of sight care. Ken’s obligation to Eli was deep and intentional. If anything would have happened to me, Ken was powerfully committed to Eli forever. He loved Eli and he loved me with all his heart.

Ken wasn’t just superman, he was my superman. The fact that he worked hard to save the world for all of us was only part of his charisma. Ken had the best laugh, keenest wit and the kindest heart. He was a total “guy”, but also very loving and tender too. I am so privileged to have known and loved him. The world is a lesser place without Ken Gordon. - Betty

When I lived in New York we had a similar guy, Patrick Moynihan. Avidly liberal but bottom line he put what was best for the country in front of his ideology. I had a lot of respect for him.

Agree. Can anyone name a current serving US Senator you can say the same about?