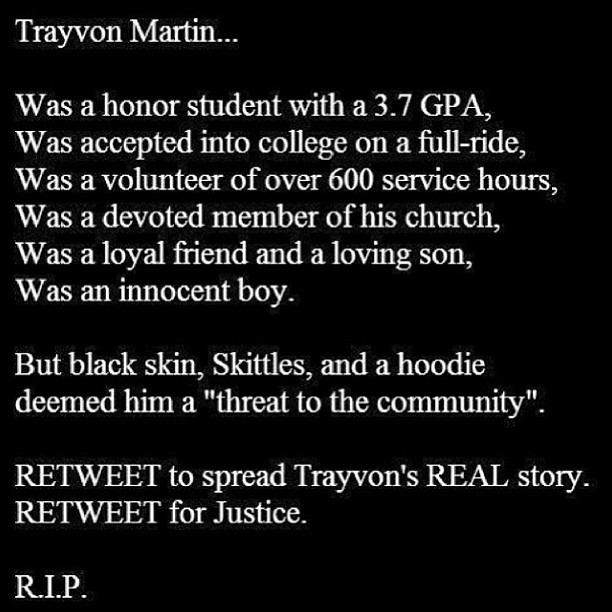 Posted on Facebook by someone named Pauley- Fitness Barnett. Reposted by a retired High School teacher, who should know better. Moonbat Progressives!

My comment on her repost? Oh, bullshit!
Posted by Well Seasoned Fool at 5:42 PM

Not sure if I know how to link to facebook correctly, but this video went up yesterday.
The guy in it is black and he has a tremendous message. I wandered through his page a bit, and find that I don't agree with him on everything, but the video is spot-on.

One cannot let facts get in the way of reality, ya know. Trayvon's skirmishes with the law are well documented.

I'm amused when folks don't get the Skittles and Arizona Iced Tea correlation. Ever heard of "Drank"? It's a combination of Skittles, Ice Tea and Robitussin all mixed together and makes for a good buzz. Given Trayvon's history with pot. It's not a long leap to Drank.

He was not with his mother, who lives in Miami, because he was kicked out of school for possessing burglary tools and stolen jewelry. There had been a rash of school locker break-ins.His was in trouble many times for fighting in school.....that's just a short list.

Yeah, he was a genius...and an angel to boot! Living in Florida has it's advantages when it comes to ferreting the truth about much of this whole thing. Information that those outside the state will never hear. 3.7 grade average? (chuckles)

Yep, that satire skipped right over that 'educator'... sigh

Must confess it skipped right over me the first time I read it. Still not sure if the author meant it as satire.

There's another one out there comparing GZ getting off after shooting a teenager and a black women was sentenced to 20 years for firing a warning shot. At least that's what she claim's but, that is not the truth.

Know a criminal defense lawyer who says most prosecutors are piss poor in a courtroom. Most of their "lawyering" is of the "Let's Make A Deal" nature. Must have been a nasty surprise for them when folks all over the country reached into their pockets to make sure Zimmerman had a good defense. Real grass roots effort.
See now where POTUS and the AG are calling for a national "Discussion". Yeah, we know what that means. Fuck em.

Ah, civil prosecutors, keep in mind WSF, somebody always has a niece, nephew, son, daughter that needs a job.

Love Faceplant. The sad part is the fact that many people believe these types of posts when they go up and don't educate themselves with the real truth. Perhaps the parties in all cases are not the perfect pictures of villain and victim, but no sense making one or the other more grandiose than they truly lived. Excuse me now while I go write Charles Manson a fan letter because he is so cool. Bleh. :)