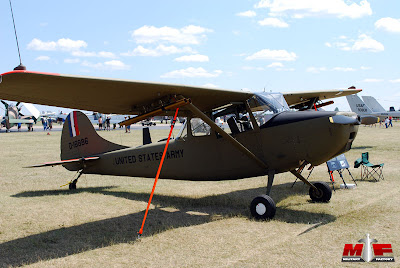 Old NFO has some great military flying stories. Us mud dabbers can only read them and be amused. http://oldnfo.blogspot.com/

An Army flying story circa 1965 involves the rude comeuppance of a certain Captain of Aviation, T, by a Private First Class of Engineers, O.

Said PFC was a two year draftee from Texas who grew up in a crop duster family. By the time the Army called, he had many hours of low level flying experience. In typical Army fashion, he became a combat engineer while the Army was spending $18,000 or so to teach people to fly.

The PFC had a medical problem that involved a long wait for an exam. When there was an exam opening in Frankfurt, our unit was in the field, hours away. A decision was made to fly him to Frankfurt in a L-19/O-1.

Captain T was assigned the mission. His favorite diversion was scaring his passanger by pulling back on the mixture control until the engine ran rough. He would then put on a panic act until the aircraft was about 200’ AGL. Turning his head, he would say, “I’ve done everything I can think of. Can you do something”? He did this in the vicinity of the Main River, which PFC O knew went past Frankfurt.

The L-19/O-1 was soon about two feet above the Main River. PFC O stayed at that altitude all the way to Frankfurt, lifting over barges, and going under bridges.

PFC O said there was some initial struggle over the controls but most of the trip was made with Captain T’s hands in his lap. He said there was a large amount of vocalization over the intercom, orders being issued, and so forth, which he ignored, wanting to concentrate on his navigation.

Some veterans may remember the “Overseas Weekly“. PFC O was the subject of an article. The incident as reported involved alcohol, public urination in downtown Munich while totally nude, and his clothing being found in some civilian’s automobile. While he was a willing worker, some of the unit officers and NCOs believed PFC O had an “attitude” problem. Perhaps this is what confounded Captain T.
Posted by Well Seasoned Fool at 12:19 PM

Have lost track of him years ago. However, if you know a East Texas pilot with a three letter last name, about 65, and a bubble and a half off plumb, you may know PFC O.