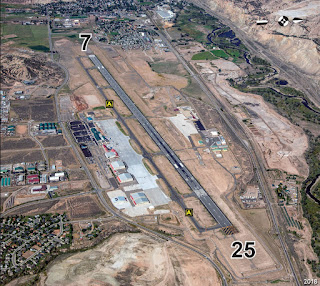 One of Colorado’s nests of trust fund snots is a circle including Aspen, Vail and Eagle, CO. The Eagle Regional Airport accommodates any size private jet for those too timid to use Aspen. Needless to say, but I will say it anyway; they are “greenies” with no financial skin in the game.

Two hundred or so miles to the West is the Unita Basin, one of the poorest areas in the Intermountain West, that is home to vast mineral resources. The only transportation is trucks on two lane highways.

For decades people have been trying to build a railroad into the region and finally overcome most legal and government obstacles.

This will tie into the existing Union Pacific (former Denver and Rio Grande) mainline from Grand Junction, CO over Soldiers Summit and on to Salt Lake City.

Of course, the enviornazis are suing. That is not surprising. What is surprising is Eagle County, CO is part of the lawsuit. I bet the non environment nuts (You know, the ones who staff the stores, plow the roads, etc. and surviving ranchers) must be thrilled their tax money is paying part of the cost of a legal action where they have no dog in the fight.

Why would the county commissioners take such action? Judge for yourself.

ADDENDUM: The Union Pacific acquired the Denver & Rio Grande three decades ago and operate the mainline that passes a few miles away from Eagle. The UP abandoned the Tennessee Pass route that does pass Eagle to Minturn and then over the pass to Leadville and on to Pueblo. Several parties want to open the Tennessee Pass route and that gets the “greenies” foaming at the mouth.

As my father said in 1970, an environmentalist is someone who bought his five acres last year.

You'd think that even the socialists would understand that roads and transportation infrastructure are essential to industrial growth. Yes, I realize that may be too much to ask, but they can tax it and make money on it that can be squirreled away.

LL
For them, virtue signalling is more important than making hard decisions.

Gah...But I guess I shouldn't be surprised...

Old NFO
Eagle County, once you get away from the "elite" areas, has some of the worst roads you will find.

LL has a point, even socialists should understand that roads, infrastructure and industrial growth are good. But these people aren't normal socialists, they're incredibly rich socialists who stay rich regardless of the economy around them, at least for now.

And of course they don't care about their servant serfs. At. All.

I scorn that so much I'm going to have to bite my tongue.

LSP
The rich do suffer. Living costs are so high in their enclaves the serfs can't afford it and the rich have a hard time finding serfs to do serf work. Often the serfs try to live in their cars (in the winter) and the rich then complain about parking.