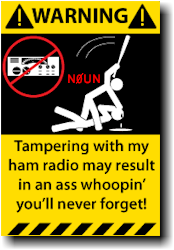 Just a post aimed at family members. Other may get something out of it.

Seeing posts from people involved in amateur radio got me to reminiscing about my late uncle Joe. Copied an announcement from the ham newsletter in 2001.

Joe White, K0CNV, a long time RMRL member, died February 20 after
being in failing health for the past few years. Joe was a fixture
of the Denver amateur radio scene for more than 40 years, and was
in the commercial tower business prior to his retirement. He also
ran the RMRL swap net until his health concerns prevented it.

He was married to a large brassy blond named Elise. Medical problems prevented them from having children and their chaotic life precluded adoption. He focused his energies on ham radio and she on disabled veterans, abused children, and an obscure Indian village in Mexico.  The woman was formidable.

Joe’s principal employment was a heavy truck mechanic. He was so good his company would fly him out by helicopter to their broken down trucks.

Joe was willing, no eager, to teach me all about ham radio. I never caught the bug. I do remember him telling me his tower, all 40’ of it, was grounded in an underground stream. Said it gave him a powerful ground wave. I assume some readers will know what that means.

At family gatherings the younger children would be tasked with climbing trees to string antennas.

For all his mechanical skill, he neglected their vehicles. Elise nagged him to fix her brakes. He said he would do it; she didn’t have to remind him every six months. When they got to the point where the brakes had to be pumped three times, she took it to a local shop. The next time he drove it, at the stop sign he pumped the brakes. Took him a few years to live that one down.

Elsie was an indifferent housekeeper. Not long after my wife and I married we were visiting and Elsie feed us stew. Since it was prepared in a pressure cooker I felt it was safe to eat. As my bride was eating the family cat walked across the table and my wife’s plate. Calmly, she lifted the cat off the plate and continued to eat while avoiding the paw prints in the stew. Damn, I was proud of her.

Elsie would spend all year gathering clothing and useful items for the Indians. Once a year she and Joe would pack a large trailer and head to Mexico pulling it with their pickup with a slide in camper.

They devoted countless hours to supporting Search and Rescue with communications and whatever civil defense needs were in their community. They were two people who gave unstintingly to others even when they barely had a pot to piss in.

I could have done without Joe and a buddy showing up for our wedding drunk on their asses. Oh well, part of belonging to a large family.

Elsie had serious health problems. One time when she was in the hospital, my wife and I visited. There was a constant stream of visitors. An eclectic mob to be sure. Everything from black ladies dressed in their best church clothing,  WW II vets in wheelchairs, foster parents, and some I couldn’t classify.

Elsie preceded him in death by a decade. As his health faded, several of my cousins rallied to his aid insuring home repairs were done, yards were mowed, etc.

I assume these are for certain periods as I remember him having the same call sign for as long as he was involved in amateur radio.

He had a side business climbing broadcast towers to repair burned out lights. More than once he offered to bring me along. Gosh, it always coincided with something I had previously committed. Heights in airplanes don’t bother me. Towers? Cliffs? Makes my scrotum make friends with my diaphragm. I can, and have, done it but I damned sure didn’t enjoy it.

Over the years as a young man, I was exposed to a lot of expertise by aunts, uncles, and older cousins that I am richer for knowing.  Uncle Joe was a part of that.
Posted by Well Seasoned Fool at 9:21 PM

May he rest in peace.

I got the Ham Radio bug when I was 12. Got my license in 1964, and it led me to a very interesting career in electronics.

Hams are also a pretty eclectic bunch. Some are true radio professionals, and others...well, let's be nice and just say they're "different"!

well, let's be nice and just say they're "different"!

The large crowd at his memorial service was "different" and that is by our family "standards", just saying.

Uncle Joe said that his call sign meant - K Old Cranky Nasty Vicious. At his memorial service, one side of the sanctuary was White family and the other side was Ham family. Pretty full on both sides. both he and Elise spent countless hours during the Big Thompson flood helping search & rescue, first responders, law enforcement, media & the general public with trying to find folks in the flood zone and get help to them. Always an interesting couple. Sisty

Uncle Joe sounds like the kind of many I would enjoy tossing back a few with.

I never cought on the the Ham stuff, but I did have a home base CB unit. I had fun at night using that D-104 'Chicken Choker', talking to my friends in the South.

Never big on CB except during the 55 mph era. My youngest and his tweener friends were big pests with their potty mouths and antisocial attitudes when they had access to CBs. Had to out a stop to it in my house.

That was really interesting. Seriously. The people I knew as a child and young adult had SO much influence on me, and I did not realize it at the time. The perspective of all those years behind me brings it into focus.

I am with you on the heights thing. Makes me sick to contemplate. That and the claustrophobia make me a lot of fun. :)

I have just a touch of claustrophobia but can usually ignore it.

When it comes to heights I just suck it up and get it done. What I don't do is go looking for the experiences.

Interesting individual, and sounds like one heck of a couple!