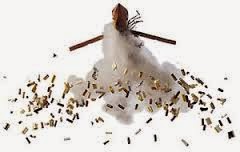 ISIS. What follows is a long, meandering, and possible, pointless rant. An unnecessary personal bloviation, you may say.  You have been warned.

My late father was a WWII India veteran. Originally trained at Aberdeen MY in Chemical warfare, his unit was switched to “Air Corps Quartermaster in charge of Graves Registration”, per him, on arrival in the Assam area. He had a gift for languages, learned Hindustani among others, and ended the war running a Quartermaster operation using native laborers. He was adamant about the following.

“The only thing an Asian understands is a boot on his neck, and rice in his belly”.

“I fought in one Asian war. I didn’t raise a son to fight in another”.

I can only imagine the outburst had he lived long enough to see a grandson go off to another Asian war.

I see lots of opinions, in the news, on blogs, and
the political opinion galleries that the answer is to “bomb them out of existence - smash them flat. Perhaps the appeal is that bombing, from the point of view of those not doing it, is a “clean” solution. For the crews that fly those missions, the ground support personnel that support the missions, and the staff that plans those missions, it is a hard, brutal way to wage war. Ask the aircraft carrier personnel what it is like.

Worse, to date, it hasn’t worked. Please read this, then come back.

There are sound arguments to merge the Air Force back into the Army and Navy.


The tip of the spear is what decides things. All this squabbling about what part of the spear shaft is the most important just detracts from the need to have the damn spear to begin with.

But I wander, and will try to return to the path of my father’s teaching.

We have, for decades, shipped “implements of destruction” to the Middle East. Granted, much of that benefited our domestic industry. We have trained the Arabs, built their infrastructure, and put them in a place where they can take care of their own problems. And, they should. I don’t give one half of a rat’s ass about the fortunes of Halliburton and others. They took on the risks with the expectation of immense profits. The blood of our children should not be spent to save their financial asses.

But WSF, it is the resources. Well, duh. Those resources aren’t going anywhere, just the ownership may change. For the resources to have any value, there needs to be a market. Try this scenario. Not one tanker load of crude transit’s the Straits of Hormuz for six months. Which collapses first, the world economy, or the Gulf State’s economies? Who then kisses who’s ass?

Like anyone, I’m appalled by the savagery of ISIS, by the slaughter of ancient religious groups, Christians, and ethnic groups by these murderers. The answer is in the hands of the people of the region to put a lid on it. It is time for we in the West to stop thinking  our  way of conducting our affairs should be the way of the world conducts theirs. That is racism in it’s purest form.

Last but not least. The wealthy Arabs need another favorite song than, “Onward Christian Soldiers“.

Well, my first comment disappeared. Just like ISIS should. LOL. I thought it was an interesting and well written rant. I don't like ISIS either. Hope you are feeling better.

THAT is it in a nutshell... Bombing isn't going to end anything unless you park a nuke on their asses...

No will to use a nuke until Iran does. The boots on the ground this time need to be Arab boots.

WSF- Agreed! The problem is they have NO leadership...

You are right. I maintain their problem IS their problem, not ours. Once worked for a man who often said, "That is your monkey, and you are not giving it to me".

I'll go even further back.......once our troops took fire from a mosque and weren't allowed to flatten it, we lost the upper hand. It was then time to leave. Nothing will ever change when the military's mission is to win hearts and minds. And battles are never won with that mindset.

Nothing will ever change when the military's mission is to win hearts and minds. And battles are never won with that mindset.