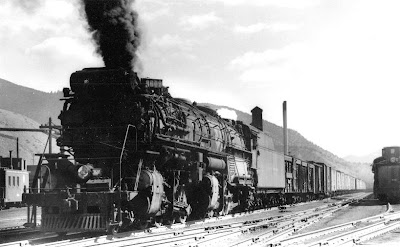 Milepost 154 has some wonderful post and pictures of trains and riding trains. As an eight year old I had several rides in the cab of a Denver & Rio Grande 2-8-8-2 steam locomotive. These engines were used as "helpers" to push heavy freight trains up the grade from Hot Sulphur Springs, CO to the West Portal of the Moffat Tunnel at Winter Park, CO. They were based at Tabernash, CO which was once an important maintenance site. At the time, a roundhouse still existed.

My family lived in a house car and my father spent that summer as the foreman of a track crew. Most crew members were Navajos. There were no other children near my age in the area so I spent my days exploring all the engines and railroad equipment.

The engineers and firemen liked me and let me ride on their trips. I would come back badly needing a bath from the coal dust. There exists no greater thrill for an eight year old than blowing the steam whistle of one of those monsters at every crossing!

Oh man, that MUST have been fun... Sadly my Grandfather who was an engineer for Union Pacific only ran the Southern Route, and had retired by the time I came along. He did take my Mother on quite a few 'rides' by dressing her as a boy. They also used to shoot Antelope from the train and stop and pick them up for dinner...

Making noise, getting dirty, doing something that the other kids don't get to do ------ who says that your early years didn't have some high spots? Too bad I got in on the tail end of the railroad years. Oh, well, I had my horse, dog, and cat to grow up with.

I love trains as well, the house i grew up in was close to the tracks and the train would come through every night around 2am. years after we moved i use to still wake up and wait for the whistle to blow.

Now im all grown up and still get to see alot of trains when i work on the road. I collect stamps and my fav stamps are trains and ships.
Thanks for the post of that picture, there is alot of history there. Grade A++ post!

Sis,
Other high spots were being in areas seldom visited by other people. Their had no easy access. As you may remember, our father kept fresh venison in the larder all year (hunting season - what's that) and my fishing provided many meals. Most of the trout were in the 14" to 16" range. We would cut off the heads and tails then freeze them in a cake pan full of water. We would then wrap the frozen blocks and put them in the freezer. Glad you grew up during the "affluent" years.